Nervous Badger back in boots to represent the World

Nick Cummins is the king of colloquialisms, but it would be fair to say he’s as nervous as a cat in a room full of rocking chairs ahead of Friday’s Rapid Rugby Showcase opener in Perth.

The ‘Honey Badger’ is one of the higher profile members of a World XV selection which will take on the Western Force at HBF Park and, while he might still look the part, the 31-year-old former Wallabies winger has made more headlines for his form on the small screen in recent times than flying down the flank.

After his infamous appearance on Network 10’s The Bachelor in 2018, Cummins was keen to keep the focus on rugby before the World XV’s first training session at UWA Sports Park on Tuesday, a venue he frequented countless times during seven seasons with the Force. 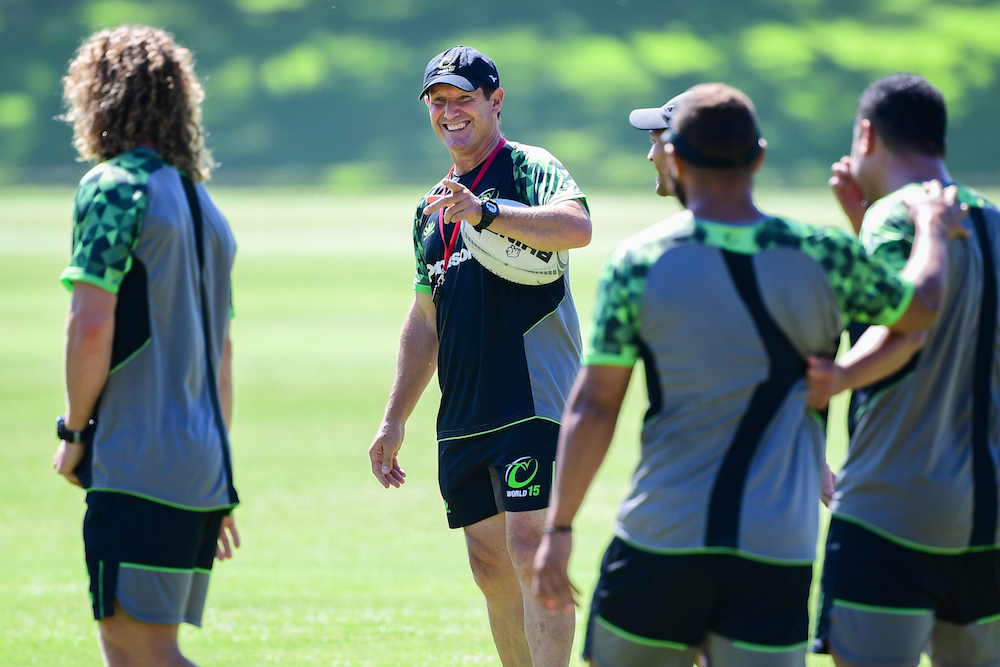 “Yeah, there’s a lot of memories there, mate, and a lot of training sessions down here actually – pre seasons – a lot of throwing up, that sort of thing – all really positive,” said Cummins, who last played professionally for Coca Cola Red Sparks in Japan in 2016.

“You’re making me nervous (reminding me how long ago I played). I’ll probably be gassing it down the sideline and there’ll be some sniper will get up and get me, because the old hammies aren’t conditioned that well.”

There was a strong element of ‘getting to know you’ about the World XV’s first session on a hot and humid morning in Perth, and they’ll also need to fast-track familiarity with Rapid Rugby’s unique laws.

These include nine-point tries for any scoring play that begins inside a team’s own 22 and rules which strongly discourage kicking as a tactic to exit the defensive zone, but Cummins was excited about the changes, especially the advent of 35-minute halves and rolling substitutes.

“It means just spin it wide and have a go, that’s what it’s about isn’t it,” he said.

“High energy, putting bums on seats, the people want to see that sort of stuff.

“This nine-point try business from inside the 22 – mate – swing it wide.

“70 minutes, yeah, bloody oath. Yeah, I’m happy to knock a few minutes off, but it won’t knock off any intensity.”

Friday’s clash is the first of the Force’s six Showcase fixtures at HBF Park against various Asian and Pacific Island opposition between now and August 9 after Global Rapid Rugby’s official launch was delayed until 2020.

Organisers say this extra time will mean a higher likelihood of teams in Western Sydney, Japan and New Zealand taking part in Andrew ‘Twiggy’ Forrest’s vision for an elite Asia Pacific tournament and World XV head coach Robbie Deans is certainly a fan of the initiative.

“There’s no doubt that Asia’s going to be big in the future, economically and in the game,” said former Wallaby coach Deans, who bought his Panasonic side from Japan to Perth in August 2018 to take on the Force.

“Out of necessity World Rugby needs to cater for this area, and clearly Rapid Rugby want to be part of that, and I’ll be very surprised if they’re not.

“There will be a lot of people who will want to join them, the concept’s good, the community based concept is good.”

This week Deans has a mostly antipodean mix of youth and experience at his disposal, with former Force and Wallabies star Digby Ioane part of the squad, as well as 17-cap Springbok Gio Aplon, ex-All Blacks and Crusaders trio, Andy Ellis, Wyatt Crockett and Corey Flynn and 50-Test Argentinian back rower Leonardo Senatore.

Young Australian forwards Tom Moloney, Jack Cornelsen and Michael Oakman-Hunt will also feature, along with centre Dylan Riley, but Deans said the fallout from Friday’s tragic terrorist attack in Christchurch may have an impact on the final make up of the team and a minutes silence will be held in memory of the 50 victims before kick off.

“It was a horrific event and it’s numbing, to be honest,” said Deans, a former Canterbury player who coached the Crusaders between 2000 and 2008.

“You can’t comprehend it, you can’t understand it, and we probably never will – but it’s left a footprint in Canterbury and in New Zealand that will last for some time and obviously society will never be the same again.

“We’ll never take for granted the things that we had and obviously we’re very conscious of those that have suffered – it’s just horrific.”